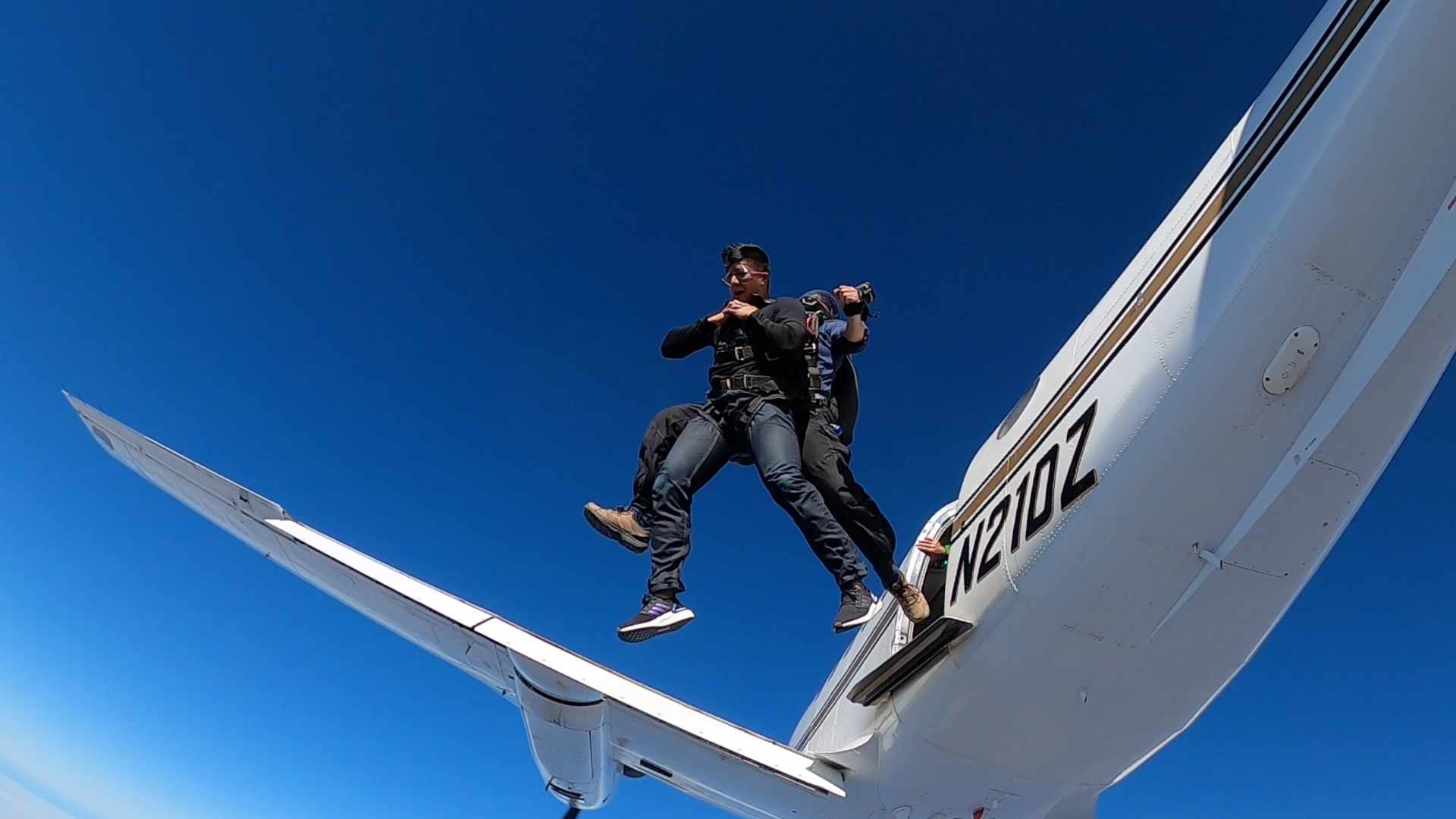 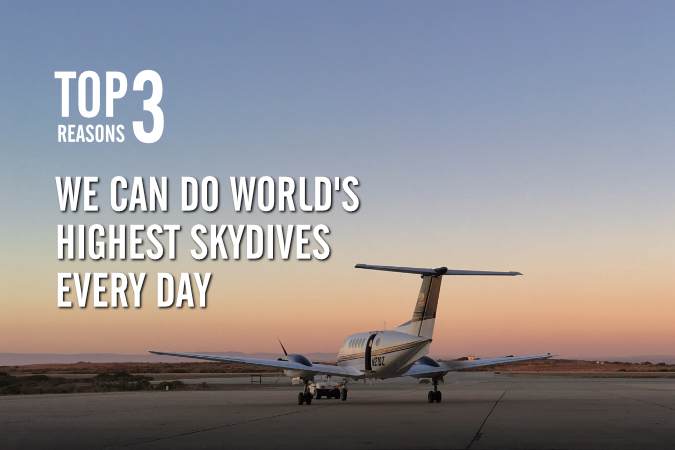 The sensational view of Monterey Bay is just one reason why many people decide to jump at central California’s paradise skydive destination. Skydive Monterey Bay is one of the best places to skydive in California. It offers the World’s Highest Tandem Skydive on every flight, on your very first jump. It is the only skydive center in California that offers the world’s highest tandem jumps every day, on every flight.

Perhaps you’re considering making your first jump but never specifically thought about the jump altitude or didn’t realize it varies so much amongst skydiving centers. Jump altitude is definitely something to consider when deciding where to make your first skydive. More than half of the skydiving centers in the United States jump from an altitude of only 10,000 feet, and approximately 95% jump from 14,000 feet or less. Only a handful (less than 5%) offer first skydives from 18,000 feet. Only a few of those offer the world’s highest jumps every day, on every flight.

There are many reasons why you would want to skydive from 18,000 feet. For most people, their first skydive is their only skydive (although there are many reasons and benefits to do a second or third jump). If you think your first jump could be your only skydive experience (that might change after your jump) then extending the experience for as long as possible should be the ultimate goal.

Since the World’s Highest Jump is such an appealing option, some other skydive centers advertise 18,000 foot tandem jumps. The reality is that Skydive Monterey Bay is the only skydiving center in California that offers the world’s highest first jumps on every single flight, every day of the year.

Regular everyday skydives from 18,000 feet are so rare simply because of the operational challenges and logistics involved. The three (3) main reasons why Skydive Monterey Bay can offer this amazing skydiving experience include our extremely fast and powerful aircraft, our location, and our operation philosophy.

Our Super King Air 200 is the only one of its kind in the skydiving industry in the United States. Skydive Monterey Bay’s Super King Air 200 has been equipped with extremely powerful Dash 41 turbine engines, producing more horsepower than any other skydiving airplane in the country.

With 1700 horsepower, our twin-engine aircraft climbs to our jump altitude like a rocket. It has roughly double the effective horsepower of most other skydiving airplanes making it the fastest climbing aircraft for skydiving. It is the main reason why Skydive Monterey Bay is one of only a couple of skydive centers in the US that can offer 18,000 foot skydives every day, on every flight.

The climb rate is particularly important because that means we do not require complex oxygen systems for jumpers. The amount of time we spend at, or above, 12,500 feet is only a few minutes. In fact, the entire flight to 18,000 feet is typically only 7-9 minutes. In more common skydiving aircraft, the total flight time would be 25-40 minutes. Approximately 15-25 of those minutes are above 12,500 feet, thus requiring oxygen to reduce the effects of hypoxia (which begins to occur when you spend more than 10 minutes at high altitudes). Our aircraft, on the other hand, climbs fast enough to get the maximum skydiving experience with normal aircraft and skydiving equipment.

The superior climb performance of the Super King Air 200 also means that we can cost-efficiently offer the world’s highest jumps every day, on every flight. In fact, our 18,000 foot jumps are more valuable when compared similarly at price to many other skydiving operations around the United States that only offer lower exit altitudes like 10,000, 12,000, or 14,000 foot jumps.

Our Super King Air 200 seats 21 skydivers and has a large fuselage meaning that it’s quite comfortable by skydiving standards for the quick ride to jump altitude. With twin engines, a T-shaped high tail and horizontal stabilizer it is incredibly stable and safe for skydiving operations.

Many factors need to come together just to enable regular skydiving operations to occur, even more, when offering the highest jump altitude. Some skydive operations face issues with local airport management in terms of restricting their operations. Skydive Monterey Bay is fortunate to have strong local support from the city of Marina, Monterey County, and the Marina Municipal Airport. Through these organizations’ support, we’ve become a Monterey Top Attraction.

Other skydiving operations may face high altitude drop restrictions because of aircraft performance, topography, traffic, or restricted air space imposed by Air Traffic Control (ATC). We are in continual communication with ATC and have been granted airspace clearance for 18,000 foot jump operations. Not every skydiving center is as fortunate.

3. Offering the World’s Highest Skydive is Part of Our Philosophy

Ultimately, skydiving packages, jump altitudes, and aircraft are all at the discretion of the operator. Skydive Monterey Bay is owned by lifelong skydivers, all with ten thousand plus jumps, who absolutely love the sport. They endorse and embody the “Go Big” mentality.

For most people that try skydiving, it’s a bucket list, special occasion, once-in-a-lifetime experience. We believe wholeheartedly in providing the ultimate, most fulfilling skydiving experience. There are just so many positive reasons to make your first skydive the World’s Highest skydive. That’s why we have the aircraft capable of 18,000 foot skydives on every flight, every day; that’s why we skydive closer to the beach than any other California skydive center, and that’s why we offer it to you at prices that are comparable to other skydiving centers.

Theoretically, it is possible. There are a couple of skydiving centers that offer high altitude, low oxygen jumps, otherwise known as HALO jumps. These are extremely rare even for licensed jumpers because of the exorbitant cost, added complexity, and risk. A HALO tandem jump, for example, could cost you between $3000-$4000, requires an FAA Class III Medical, two or three days of training, and breathing oxygen prior to and during the flight to altitude. There are complex systems added to what is normally a simple process.

Considering all of that, a HALO tandem jump won’t be your first skydive. You will still be required to do a regular tandem training jump from a more standard altitude (~13,000 feet).

With the same financial investment, you could do the world’s highest first jump, complete your solo license training, acquire your internationally recognized “A” license, and have completed 25-30 jumps with Skydive Monterey Bay. If you’re doing the math, that would be about 540,000 feet of skydiving with Skydive Monterey Bay compared to 45,000 feet of skydiving for the HALO jump and its respective training, at the same price.

2. Why don’t more skydive centers use King Air aircraft if they climb so fast?

The two most probable answers are availability and cost.

There are less than 700 King Air 200’s in operation currently, the majority of which are used in military operations or have been converted to corporate or personal commuter aircraft. Only a handful operate in skydiving (most of which we currently own).

Many medium to large skydive operators have moved to or continue to utilize single turbine engine aircraft (while smaller operators use single piston engine airplanes) due to lower maintenance and operational costs. However, lower operational costs are a trade-off for raw power and ultimate aircraft performance. King Air’s are twin-engine turbine aircraft. Our 200-model series has turbo-powered engines allowing us to climb efficiently to 18,000 feet on every flight.

We chose to source and fly these aircraft despite higher operational costs so that we can provide the best skydiving experience possible for your first jump.

3. Does the cabin need to be pressurized when climbing to 18,000 feet?

Aircraft cabins intended for skydiving use are never pressured for two main reasons. First, air pressure is not an issue at typical skydiving altitudes. Second, the intention is to open the door at jump altitude. Since a pressurized cabin is artificially creating an air pressure similar to sea level, opening a door or window would break that “seal” causing turbulence while the air pressure from outside and inside reaches an equilibrium.

Commercial airliners are pressurized to ensure the cabin remains at sea level air pressure to prevent hypoxia, a condition resulting from low levels of oxygen to the body’s cells and tissues. Symptoms of hypoxia may present themselves after a person stays in a thinner air altitude (above 10,000 AGL) for 10 minutes or more.

Skydive Monterey Bay’s aircraft is so fast in its climb to 18000 feet that we only spent a few minutes above 10,000 feet.

4. If you do the world’s highest skydive does the “thinner air” make it more difficult to breathe?

One of the biggest misconceptions for first-time jumpers is experiencing difficulty breathing during freefall. That misconception is generally related to the idea that “thinner air” makes it more difficult to breathe. Thinner air, or air with lower levels of oxygen, is more difficult to breathe at very high altitudes or moderately high altitudes over a period of time. At least 10 minutes of breathing air above 10,000 feet would be required before sensing any effects. With the speed of our aircraft, you will exit for your skydive in less than five minutes. You will be higher than 10,000 feet for just a few minutes.

Some first-time jumpers feel they have difficulties breathing during freefall because of the wind speed. This myth exists with people jumping from any altitude, whether it be 10,000 or 18,000 feet. There is no physiological limitation or challenge to breathe at the 120 mph wind speeds of freefall. Our instructors and experienced skydivers do it dozens of times a day. If you were driving on a racetrack at 120 mph in an open cockpit you would be able to breathe normally. This sensation is completely psychological. It is related to holding your breath during nervous or anxious moments. This is evident by the fact that first-time jumpers most likely feel this sensation when they first jump. The exit launch tends to elicit the strongest emotional response resulting in altered or paused breathing. As the skydive continues and the jumper begins to relax in freefall, breathing patterns return to normal.

5. Why does the pilot breathe oxygen?

Pilots and passengers are subject to different aviation regulations. In reference to slower aircraft, you may be at higher altitudes for up to 30 minutes, requiring supplemental oxygen. Our pilot breathes oxygen during the flight to comply with aviation requirements. Because of the limited amount of time our aircraft is at the higher altitudes during flight, supplemental oxygen is not mandatory for passengers, however, can be provided. We operate within the standard parameters in which this regulation was created, and we strive to adhere to all applicable aviation regulations.

6. How does the elevation of the skydiving center affect my jump altitude?

Technically it doesn’t. However, you should note how a skydiving center defines its altitude measurement to ensure you’re getting as much freefall as expected.

In aviation, it is common to refer to altitude measurements as “Above Ground Level (AGL)” or “Mean Sea Level (MSL”). AGL describes the literal height of an object or structure above the ground. Then MSL is the height above standard sea level. When you’re on the coast, you’re at sea level or zero (0) feet MSL. If you’re in the mountains, you are likely at a higher elevation and could be several thousand feet above sea level. South Lake Tahoe is about 6000 feet MSL, while Death Valley is one of only a few places in the US that is below sea level at -282 feet MSL.

Skydive Monterey Bay only speaks in terms of AGL (but since we’re located only a couple of miles from the ocean anyway, both AGL and MSL are the same for us). 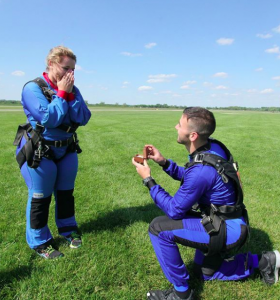 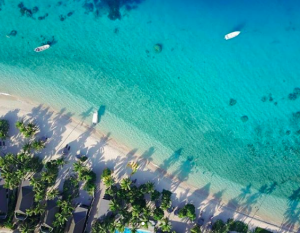 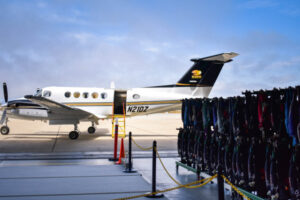 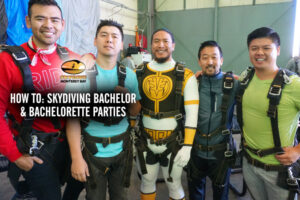 Photos of the Month